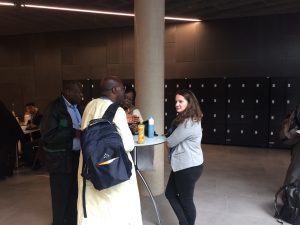 Hosted by Fiji, the 23rd Conference of the Parties to the UNFCCC (COP23) took place in Bonn on 6 -17 November 2017. The meeting focused on developing the so-called Paris Rule book, the rules and processes necessary to turn the Paris Agreement into climate action, whilst also recognising the importance of pre-2020 action and ambition. The main outcomes of the conference are contained in the Fiji Momentum for Implementation.

An LRI team of eight lawyers attended the COP over the two-week period, talking delegates through legal issues and forwarding more complex legal queries to expert advisers from the LRI network. The work of LRI generally reflects the developments and discussions in the negotiations. Thus, many queries related to the processes and mechanisms required for operationalizing the Paris Agreement, whilst others concerned domestic implementation. In total, LRI recorded nearly 40 formal queries, the majority from least developed countries (LDCs) and the LDC group, with the rest coming from other developing countries and civil society observer organisations.

LRI was also invited to showcase a new web based portal being developed in collaboration with UN Environment at a UNFCCC side event on tools to support the parties with implementation of the Paris Agreement and their NDC and at and at an expert roundtable at the ‘Climate Law and Governance Day’.

Reflecting on her week in Bonn as an LRI volunteer Caroline Dihl Prolo, the head of Environment at the Brazilian law firm Stocche Forbes, commented: “This is my fifth COP as an LRI liaison officer and each year it is clearer that vulnerable countries really need legal support, due to their limited human resources and the tremendous complexity of the process and the legal issues that are posed. If there were more lawyers on the ground and more organisations like LRI, discussions would be more inclusive and this would translate into progress on substance – rather than procedural disputes. Still I can see the impact in the work I do, and this is a priceless feeling.”