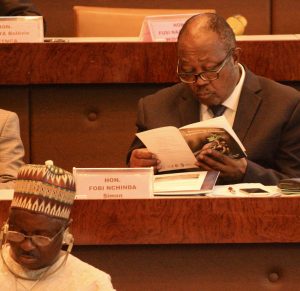 On Wednesday, 13 June 2018, an LRI publication on initial suggestions for developing legislative interventions on climate change through public consultations was officially launched in the National Assembly of Cameroon in Yaounde.

Following the Cameroonian equivalent of Prime Minister’s question time, the second item on Parliament’s agenda for the afternoon was the presentation of 2 publications: “Science, Economics and Politics of Climate Change” by the Konrad Adenauer Foundation and “Bottom-up climate legislation in Cameroon” by LRI.

The LRI booklet can be downloaded at https://legalresponse.org/further-resources/briefing-papers/ The Cameroonian Minister of the Environment congratulated LRI and its partners on the publication and called it “important and timely guidance on how to contribute to the global fight against climate change”. He emphasised, in particular, the importance of participatory approaches in developing law and policy. In Cameroon – he stated – environmental and social impact assessments are, therefore, a legal requirement for many projects, plans and strategies.

Augustine Njamnshi, a co-author of both publications, presented their main content and findings to around 50 MPs in the National Assembly. The event was organised by the Cameroonian Climate Change Working Group, a member of the Pan African Climate Justice Alliance (PACJA) and hosted by the MP Awudu Cyprian Mbaya who is also the executive chair of the Pan African Parliamentarian Network on Climate Change.

MPs preparing for the group photograph