UNEP Portal developed in partnership with LRI launched this month

The LRI was one of the partner organisations involved in developing and maintaining the content of the portal, among other specialised agencies and UN organizations.

The LEO Portal is open to everyone and is supplemented by the InforMEA’s e-learning tool, which provides open access courses that support users in the development of a comprehensive understanding of Multilateral Environmental Agreements (MEAs).

Reporting from Bonn: slow progress but hint of compromise

With signs of slow progress, the tenth part of the second session of the ADP working group concluded today.

Over the last five days, delegates from over 190 nations have been engaging in facilitated sessions and spin-off groups to discuss the “Geneva negotiating text”. This was consolidated and divided up by the ADP Co-Chairs in advance of the meeting (“Co-Chairs’ tool”) in three different sections, with part one illustrating provisions appropriate for the agreement; part two, provisions for COP decisions; and part three, with paragraphs and sections that require further clarification. While the Co-Chairs insisted that there was no hierarchy among these three sections, many delegates from developing nations expressed their dissatisfaction that some important provisions and concerns for their countries were not reflected in part one of the tool. Countries worked to address the imbalance during the course of discussions this week.

Due to budgeting constrains, many representatives from developing countries could not attend the meeting, leaving their negotiating delegations outnumbered. This added considerable challenge upon these delegations, which had to juggle numerous meetings and coordination sessions in a disproportionate manner.

By the conclusion of the session today, the general feeling was that the meeting did not result in significant progress with a draft text towards Paris COP 21. Many textual proposals are still under consideration and critical issues are yet to be resolved – a review mechanism for INDCs to ratchet-up ambition over time is one of them. On a positive note however, the issue of loss and damage – a critical aspect for developing countries, saw a hint of compromise. Marking a shift in their positions, both the US and the EU are considering compromise options on this highly sensitive matter. This is definitely a step forward in bridging gaps and finding consensus towards a successful Paris deal.

LRI has been supporting delegates from some of the smallest delegations since the start of the session. The range of legal queries received by the LRI has reflected both the complexity and breadth of issues being discussed at this crucial juncture in the negotiations. LRI has been asked specific questions addressing the possible content of the 2015 agreement (including the necessary references to a mechanism on loss and damage), the legal form of the agreement, various queries related to INDCs, institutional arrangements and governance issues of the new agreement, among other queries. 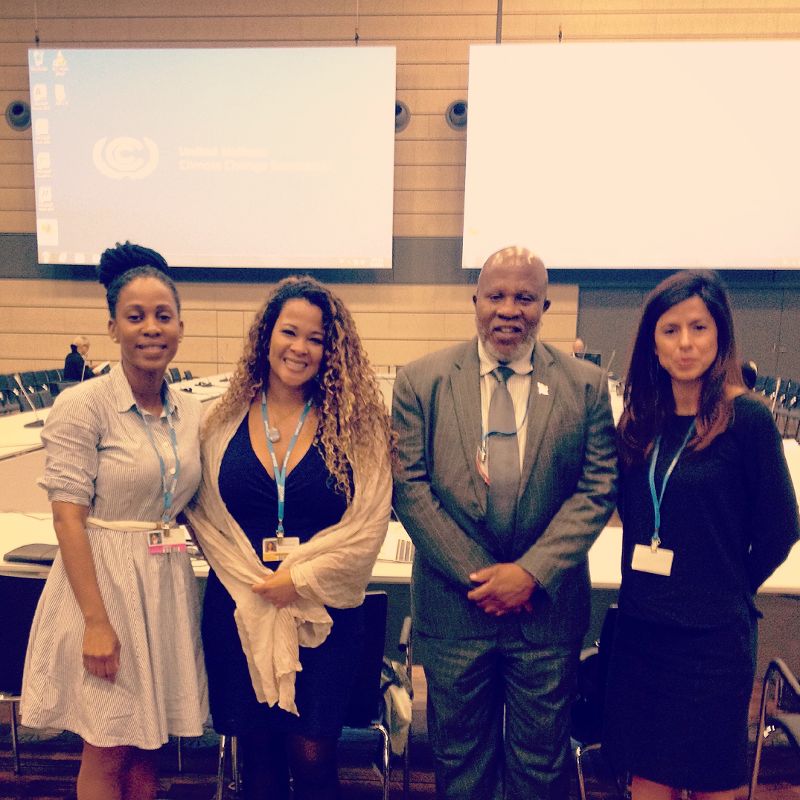 Delegates of Trinidad and Tobago with LRI team.

Ahead of next negotiation session, LRI facilitates workshop in Cameroon

LRI co-facilitated a workshop in Duala, Cameroon, on 3 – 5 August 2015. The session was organized by COMIFAC, the Central African Forest Commission. 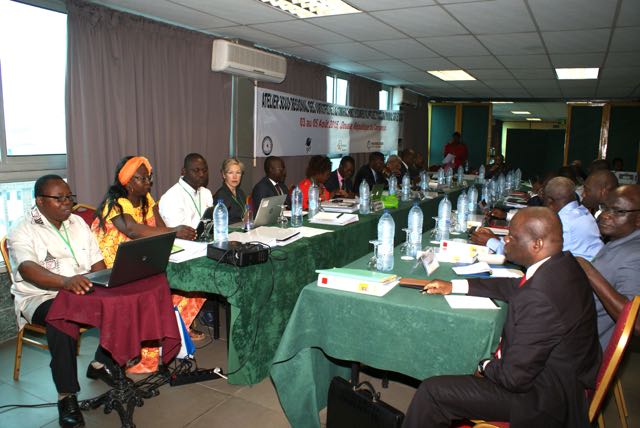 The session was attended by 20 lawyers from the Foreign Affairs and Environment ministries of the countries from the Congo basin region. Its objective was to unpack the latest version of the Geneva negotiating text and identify options most suited to the interests of countries in the region, thereby helping countries’ negotiators to prepare for the next round of negotiations in September. 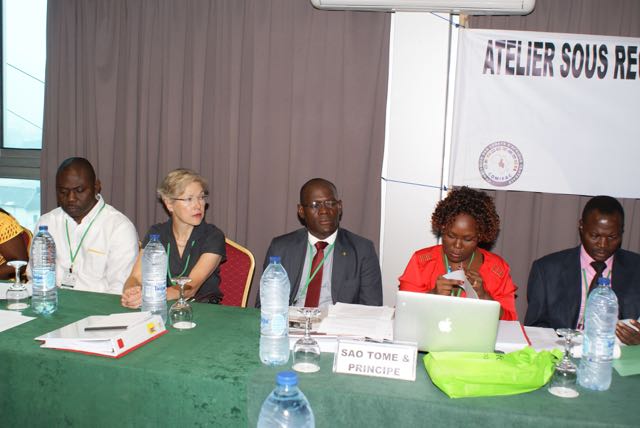 Although the Geneva text has been recently streamlined and re-structured, the document is still 83-pages long. It contains a number of intricate textual options that pose considerable challenges for country negotiators. As observed by LRI during the workshop, an additional and significant one for the participants was to analyse the text in English (the only language in which the text is currently available), when many of them do not have a good command of English.

Despite this difficulty, the group got down to work and by the end of the workshop it was far advanced in putting together its own consolidated version. This included comments and inputs to ensure that for the upcoming negotiation session, country representatives are well equipped and the region’s views are represented.

The Legal Response Initiative (LRI) is committed to create a more level playing field between representatives in the climate change negotiations. To this end, it delivers specialised training and runs an advisory service for negotiators from the smallest nations. For inquiries about our services, get in touch at: enquiries@legalresponse.org

The Bonn Climate Change Conference concluded on Thursday, 11 June, at 5 pm. Parties did not go into extra time to negotiate a new agreement on climate. The outputs of their negotiations are reflected in two non-papers, the “Working document” (68 A4 pages) and the Streamlined and consolidated negotiation text (85 A4 pages), both dated 11 June and available online at http://unfccc.int/meetings/bonn_jun_2015/session/8857.php

8 LRI lawyers attended the Bonn meeting and dealt with over 30 requests for legal advice from poor and particularly climate vulnerable developing countries. A new paper on how human rights could be integrated into the 2015 agreement was well received and two events at the university of Bonn on international law and the climate negotiations attended by many students, academics and lawyers. 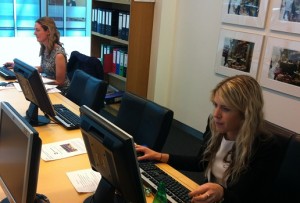 Volunteers in the ‘Situation Room’

As an outcome of the Bonn conference, Parties have requested the two co-chairs of the ADP to issue an “additional tool” which should include a fully streamlined, consolidated, clear and concise version of the Geneva negotiating text, as well as suggestions for paragraphs appropriate for a decision versus the agreement, by 24 July 2015.

This is likely to result in further discussions during the next ADP meeting in Bonn from 31 August – 4 September about if and to what extent the co-chairs and the UNFCCC secretariat have accurately represented, summarised and interpreted the Parties’ positions. Unfortunately, there are only 10 more negotiating days scheduled before COP21 in Paris.

Reporting from Bonn: with signs of slow progress, the session approaches its end

Today is the tenth day of negotiations in Bonn, Germany, which is scheduled to conclude tomorrow 11th June.

Over the last few days, since the meetings started on 1st June, Parties have been engaging in a first and second reading of the Geneva negotiating text, working through facilitated meetings to help streamline and consolidate the text.

The goal for the Bonn meeting is to deliver a shorter, clearer and more workable negotiating text, working toward a successful outcome in Paris this December. Yet, with some paragraphs proving too difficult to consolidate, the pace of the progress continues to be, overall, remarkably slow. Commenting on the reduction by only 5% after three days of arduous work (and not much more thereafter), country delegates feel that not enough progress has been made so far, and work needs to intensify in earnest. Further updates on the streamlined text are expected to come out soon.

Twenty negotiating days are available before COP 21 in Paris. Half of this time is being spent here in Bonn. As noted by a delegate, a more manageable negotiating text is urgently needed to start addressing “the real issues on the table” and allow for substantive negotiations to begin. Contentious issues yet to be discussed include the crosscutting issue of differentiation and the legal form of the agreement. Further clarity on INCDs, the length of these commitments, review mechanisms, and their legal character, is also needed.

LRI has been supporting delegates from some of the smallest delegations since the start of the session. As usual, their queries have reflected developments in the discussions. A number of delegates have asked us for clarification on the legal standing of the Geneva text and other texts being considered in Bonn. Also, as the issue of legal form of the Paris agreement is gaining momentum, a number of delegates asked us to identify the possible options available. With INDCs being a key part of this agreement, the question of how these could be integrated has also been raised for analysis. Finally, a question on which we have provided extensive advice during the last days relates to what kind of deal might be acceptable to the US and the constitutional constraints on the US ratifying a legally binding agreement.

Outside the negotiations, LRI’s Executive Director Christoph Schwarte gave a talk for students, staff and other lawyers on “international law and the climate negotiations” at the university of Bonn.

He had been invited by Prof Talmon of the Institute for Public International Law as part of a lecture series on international law. With him came Edward Wabwoto, a Kenyan lawyer and negotiator, who has been working with LRI for several years. A day after the conclusion of the G7 summit in Germany, participants were excited to hear about the role of lawyers and the law in the international negotiations; and from a ‘real’ negotiator. However, a show of hands indicated that most of them felt that it was unlikely that the ADP negotiations would conclude with a new agreement in Paris.