The adverse effects of climate change threaten the enjoyment of a range of human rights, such as the right to life, adequate food, adequate housing, and to safe drinking water and sanitation. As such, integrating human rights considerations in the new climate change agreement is an importance issue for some countries and observer organisations involved in the ongoing talks.

This LRI briefing paper offers examples to illustrate approaches and techniques available for including human rights considerations in the 2015 climate change agreement.

Drawing upon existing proposals in the current Geneva negotiating text, the paper sets out the legal implications of the inclusion of reference to human rights in different parts of the agreement; namely, its preamble and operative provisions. Other integrating options are also analysed. 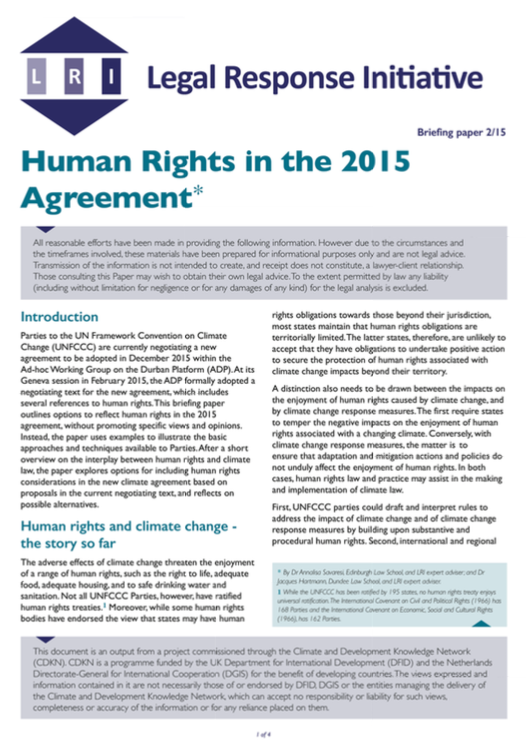 Christoph Schwarte, LRI Executive Director, Sam Bickersteth, Chief Executive of the Climate and Development Knowledge Network (CDKN) and Ben Lyon, from the Department for Energy and Climate Change (DECC) and head of the UK delegation to the UNFCCC, participated in a lunchtime panel discussion on perspectives about the new climate change agreement. The event took place on 22 April and was hosted by Matrix Chambers.

At the event, Christoph Schwarte provided a timely update on the state of play in the lead up to Paris 2015 and what to expect in June, when the negotiation sessions are scheduled to resume. He further explained some of the formal outcome options that the new climate agreement might cover and what the legal implications may be in each case.

Ben Lyon, on behalf of the UK delegation to the UNFCCC, provided viewpoints about what the priorities and expectations are for the UK and the European Union as a whole. He set out the political context in which the negotiations are taking place and laid out some of the key focus areas on the road to Paris.

Chief Executive of the Climate and Development Knowledge Network (CDKN), Sam Bickersteth, spoke about the significance of the current talks and offered perspectives about the policy work that countries are undergoing domestically as part of the international UNFCCC process. He mentioned, for example, the support that CDKN is providing to Peru for the preparation of their INDCs.

Reporting from Geneva: the pressure is on

Today is the third negotiation day in Geneva. Since the beginning of the meeting on Sunday, Parties have been making proposals to the Elements Text annexed to the Lima Call for Climate Action [Read LRI analysis on this]

The goal for the Geneva session is to deliver by Friday an official ‘negotiating text’ for Parties to continue their talks all the way to Paris in December this year.

As many textual amendments have been added, increasing the initial Elements Text to over 70 pages, the challenge ahead is to begin streamlining the document and finish with something everyone feels comfortable with. The pressure is on in Geneva as this is the last meeting before May, when according to the UN ‘six months rule’, the negotiating text must be completed.

As procedural matters have taken a central position, LRI has been assisting delegates with legal queries involving UNFCCC rules of procedure.

At today’s meeting in Geneva, LRI was also asked to present on the legal dimensions of the 2015 agreement, particularly looking at the potential outcomes and the issue of compliance. Participants found LRI’s clarification of legal aspects very helpful and further requests for assistance continued to flow. 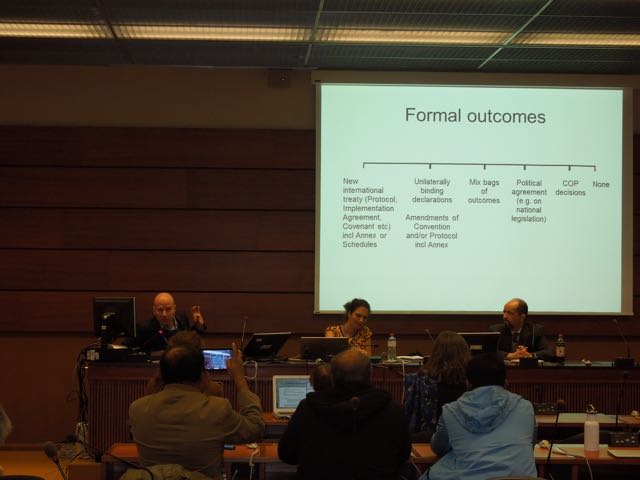 Six lawyers joined LRI as ‘liaison officers’ and assisted negotiators from developing countries during COP 20 in Lima, Peru, from the 1st to the 12th of December.

The LRI team of lawyers assisted with queries, dealing with drafting and text interpretation, referring the most complex questions to the Situation Room in London where legal experts associated to LRI were contacted to draft specialized legal opinions. During COP 20 LRI dealt with almost 40 legal queries touching upon a variety of key matters in the context of the negotiations. These included reference to adaptation in the new agreement and the future of the Adaptation Fund; the nature and scope of INDCs; questions around loss and damage and institutional arrangements, among other issues.

“During the negotiations in Lima COP20 many issues including legal aspects of existing funding mechanisms and the Climate Green Fund in light of the new 2015 agreement came out. The legal opinion provided by the LRI on the issue of adaptation for example, was detailed and good. This and other opinions provided to me during COP 20 helped me a lot for discussions and issues during this important meeting.” 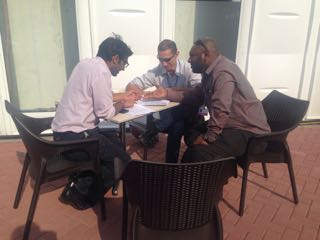 In the picture, Raj Bavishi and Subhi Barakat, from LRI, with Ruel Yamuna, COP negotiator from Papa New Guinea

Among the LRI team in Lima was Brazilian lawyer Caroline Prolo, who felt “Immensely proud of being a part of the work the Legal Response Initiative does.” She further notes,

“The climate change regime is quite complex for one to grasp, let alone to follow the multi-track negotiations running at the same time. The textual language, the piles of COP decisions, the legal terms and its implications, are all crucial parts of the negotiation process. Those countries that do not have the capacity to deal with such issues are alienated from the process. And these are the countries most in need of an effective agreement. What the LRI does is to offer its high-level network of knowledge and legal expertise to enable these countries to participate actively in the process. We are talking about the free advice of some of the best lawyers, professors and academics in the world. It is an invaluable tool at hand for these countries in need. As a lawyer myself, I am immensely proud of being a part of the work the Legal Response Initiative does.” (Caroline Prolo – Silveiro Advogados, Brazil)

In addition to running its advisory service, COP 20 was an opportunity for LRI to engage further with a range of stakeholders involved in the climate talks.

On the Gender day at COP 20, LRI published a timely article containing draft provisions on how to integrate gender in the new agreement. The article was published by the specialized magazine Outreach.